Sweden is the one country in Europe that did not opt for strict, government mandated lockdowns, for which most of the rest of the world has been severely criticizing them.  Reuters reports:

STOCKHOLM (Reuters) – Sweden’s top epidemiologist said on Tuesday a rapid decline in new critical COVID-19 cases alongside slowing death rates indicated that Sweden’s strategy for slowing the epidemic, which has been widely questioned abroad, was working.

Sweden has foregone a hard lockdown throughout the outbreak, a strategy that set it apart from most of Europe.

Chief epidemiologist Anders Tegnell of the public health agency said a rapid slowdown in the spread of the virus indicated very strongly that Sweden had reached relatively widespread immunity.

“The epidemic is now being slowed down, in a way that I think few of us would have believed a week or so ago,” he told a news conference.

Daily COVID-19 death rates as well as the number of infected in intensive care have been slowing gradually since April, with seven new deaths and no new ICU admissions reported by the health agency.

“It really is yet another sign that the Swedish strategy is working,” Tegnell said. It is possible to slow contagion fast with the measures we are taking in Sweden.”

The slowdown in Sweden matched that in several countries that have accredited it to lockdowns. “We have managed to do it with substantially less invasive measures,” he said.

Sweden’s death toll of 5,646, when compared relative to population size, has far outstripped those of its Nordic neighbours, although it remains lower than in some European countries that locked down, such as Britain and Spain.

Perhaps the best way to measure the success of Sweden’s policies is to compare the outcome models predicted to the actual results.

On May 10, Dagens Nyheter—Sweden’s biggest daily newspaper—analyzed a pair of models inspired by the Imperial College of London study, which predicted as many as 40 million people could die if the coronavirus was left unchecked. The models predicted that Sweden’s ICUs (intensive care units) would expire before May and nearly 100,000 people would die from COVID-19 by July.

“Our model predicts that, using median infection-fatality-rate estimates, at least 96,000 deaths would occur by 1 July without mitigation,” the authors wrote.

It’s a frightening prediction. And perhaps that was the point.

As Johan Norberg pointed out in The Spectator back in May, these models were used by critics of Sweden’s strategy to show its healthcare system would collapse if it did not “make a U-turn into lockdown” similar to the United Kingdom.

Well, we’re nearly through July. So how do the predictions stack up against the results?

Total COVID-19 deaths in Sweden stand at 5,700, nearly 90,000 less than modelers predicted. Hospitals were never overrun. Daily deaths in Sweden have slowed to a crawl. The health agency reports no new ICU admissions. 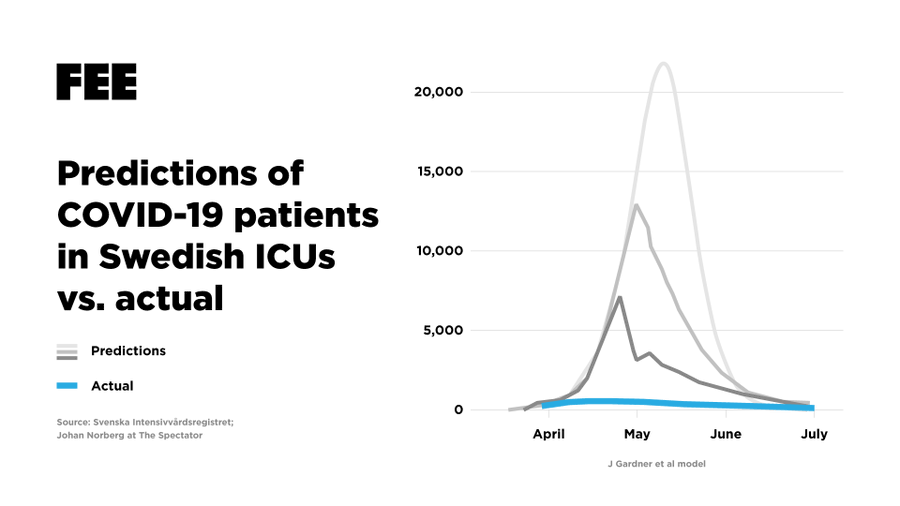 Its not even close.  None of this information is hidden from the powers that be that insist that the US must stay locked down till 2021 at the earliest, yet the narrative is spun with increasingly desperate intensity.  BGR reports:

The scary thing about the coronavirus pandemic, aside from the fact that it’s still spreading rapidly across dozens of states, is that the situation may get a lot worse once fall rolls around. Once the weather cools and flu season kicks into high gear, doctors believe that a surge in new coronavirus cases is likely.

At the same time, the odds of researchers coming up with an effective coronavirus vaccine before the end of the year is looking slim. While early clinical trials involving potential coronavirus vaccine candidates have been promising, it’s starting to look like we won’t’ have a vaccine ready to go until early 2021 at the absolute earliest. Consequently, Dr. Anthony Fauci recently said that life in the U.S. won’t return to normal until next year, even in a best-case scenario.

“The timetable you suggested of getting into 2021, well into the year,” Fauci told CBS News, “then I can think with a successful vaccine — if we could vaccinate the overwhelming majority of the population — we could start talking about real normality again. But it is going to be a gradual process.”

With work on a coronavirus vaccine ongoing, the encouraging news is that there’s an unprecedented and concerted effort amongst researchers to develop a vaccine for a single virus.

Yeah, yeah, more vaccine happy talk.  As if the Wuhan virus hadn’t mutated hundreds of times in different places, so any vaccine would have to be cooked up ahead of time the same way annual flu vaccines are now, the experts make a best guess of what is coming down the pipeline and ramp up production well in advance and hope for the best.  Normally new vaccines require 5 to 10 years of testing to make sure they are safe, but we are going to forego the testing so we can have it NOW!  What could go wrong?  Nobody wants to talk about that, but you can always read a Michel Chriton  novel.  Here’s what they are saying:

With more than 170 potential vaccines for COVID-19 under study, optimistic experts hope that a viable vaccine may be ready by the end of 2020.

Other experts caution that the timeline may be unrealistic. Only a small number of those vaccine candidates are being tested on people, and chances are many of the other projects won’t survive beyond the laboratory stage.

Even so, vaccine experts point out that funding has been plentiful, many different approaches are under study, and collaborations between small firms developing the vaccines and large drug companies with the capacity to mass produce them all give reason for hope.

The U.S. said it would fund and conduct the phase III trials — the final step to determine how well the vaccine works and if it’s safe — of four candidates: Moderna Inc., AstraZeneca, Novavax and Johnson & Johnson. The Moderna, AstraZeneca and Novavax vaccines are already being tested in people, while J&J announced Wednesday it will begin its testing in the second half of July.

To be approved, the FDA said the candidates will have to prove they are safe and that they prevent infection or decrease its severity in at least 50% of the people vaccinated.

The FDA also said it could issue an emergency use authorization (EUA) for a COVID-19 vaccine, but that would be decided on a case-by-case basis after considering all the evidence on the vaccine’s safety and effectiveness.

Read the whole thing, it is interesting.  Still, I’ll pass.  I don’t need to pay who knows how much to get a vaccine when there is an affordable cure ready to hand in the unlikely event that I am not among the 99.8% who just shrug it off.  Besides, I don’t like the way Bill and Melinda Gates’ anticipatory smile.  Run.